On Tuesday 23 June 2020, the University of Glasgow Court (the governing body of the university) will vote on whether to divest the University’s endowment funds from the arms industry. The vote is taking place as a result of the fantastic campaigning efforts of Glasgow University Arms Divestment Coalition (GUADC).

The University of Glasgow owns shares worth more than £3 million in 27 arms companies and military service providers, including 18 companies that are involved in the production of nuclear weapons, their delivery systems or platforms. It is one of only two Scottish universities that has investments in nuclear weapons out of the 10 that we researched. 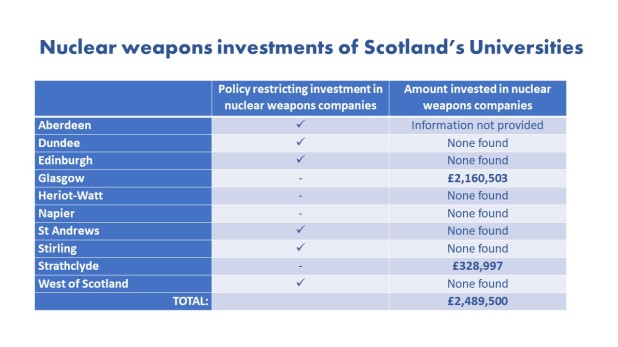 The University is investing in companies that are deeply implicated in an arms race that is bringing the world ever-closer to nuclear war. Here are some examples:

BAE Systems: One of the world’s largest arms companies, BAE Systems produces key components for nuclear weapons deployed by the UK, the US and France. BAE is one of four key contactors (along with Rolls Royce, Babcock and AWE Management Ltd) that together hold 97% of the contracts associated with the UK Ministry of Defence’s nuclear projects. The company is constructing the new nuclear-armed “Dreadnought” class submarines as part of the £205 billion Trident renewal programme.

Rolls Royce: Rolls Royce was involved in the development of Britain’s current fleet of Vanguard class submarines and has worked with Babcock and BAE Systems on the development of their replacement, the Dreadnought class. Rolls Royce has contracts related to the Ministry of Defence’s nuclear projects worth nearly £5 billion, including a £1,082 million contract to manufacture the submarines’ new nuclear reactors.

Lockheed Martin: Lockheed is one of the largest beneficiaries of nuclear weapons spending in the world. Lockheed has contracts related to the US’s Minuteman III intercontinental ballistic missiles (ICBMs) and the submarine-launched Trident II (D5) missiles deployed by the UK and the US. Lockheed is further involved in the UK’s nuclear weapons programme through its 51% stake in AWE Management Ltd, the consortium that runs the Atomic Weapons Establishment (where Britain’s nuclear warheads are manufactured and maintained). Lockheed is working on the development of a new type of nuclear-armed, air-launched cruise missile for the US, the Long-Range Standoff Weapon (LRSO). The company benefited from a surge in missile contracts awarded by the US after its withdrawal from the Intermediate-Range Nuclear Forces Treaty (INF Treaty) was announced.

Northrop Grumman: Like Lockheed Martin, Northrop Grumman has contracts related to US ICBMS and Trident II (D5) missiles and benefited from the post-INF surge in US missile contracts. The company is also part of a joint venture that manages the US’s primary warhead assembly and maintenance facility, the Pantex Plant in Texas, where the country’s new W76-2 warheads have been produced. These new “low yield” warheads increase the risk that conventional conflicts will go nuclear, as they are deemed to be more “usable” than larger nuclear warheads. Northrop is also involved in the development of the US’s new ICBM system, the Ground-Based Strategic Deterrent.

(For more information on these nuclear weapons producers and many others, see: S Snyder, Producing Mass Destruction: Private Companies and the Nuclear Weapons Industry (PAX, 2019))

Don’t Bank on the Bomb Scotland supports GUADC’s demand that the university divest from the arms industry as a whole because of the role that it plays in fuelling conflict and human rights abuses, as well its role in producing weapons of mass destruction. If the University wants to live up to its commitment to socially responsible investment, it must divest from the arms industry now.

Please support GUADC’s campaign by signing the petition and emailing members of the University Court: uofg.fail.